Our shared interest in half Japanese identity inherently stems from our experience of being in between different cultures. Like many other half Japanese people we have been making an enquiry into our mixed cultural experience. This questioning of our own identity has its roots in our appearance and ‘mixed’ upbringing as well as how we sit in the racially designated society we live in. 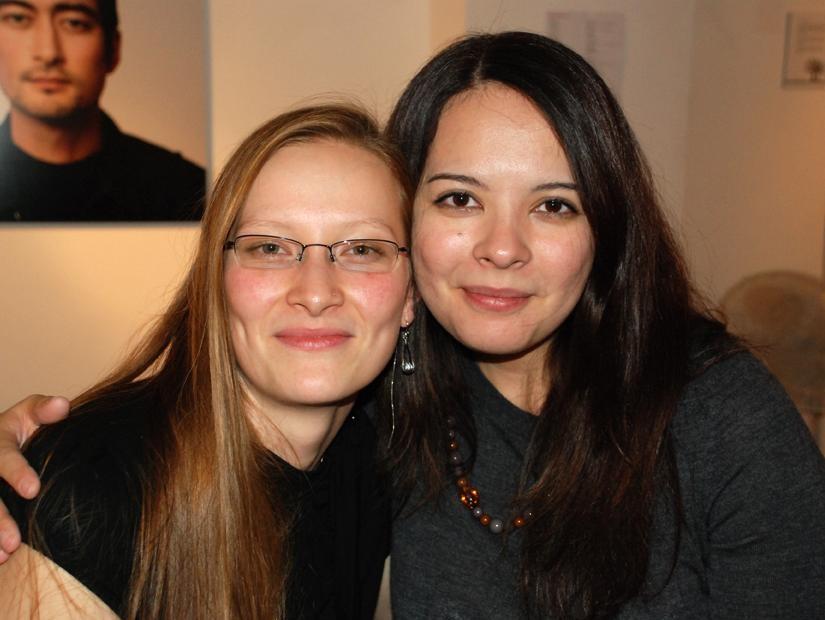 We have found that there is a growing community of half Japanese people who try to find ways of connecting with others to discuss issues surrounding their mixed cultural upbringing in online communities such as ‘Mixi’, ‘Halvsie’ or ‘Hapa Japan’ or Facebook. The ‘Half Japanese’ community on ‘Mixi’ (Japan’s Biggest Social Network with over 4.8m users) has over 3000 members. Furthermore ‘Halvsie’ has 1500 members and ‘Hapa Japan’ holds over 1000 members worldwide. The number of users of such online communities is growing day by day.

In this exhibition we combined the visual arts (Natalie’s work) with social research (Marcia’s work) to create an in-depth discourse to discuss factors determining the half Japanese cultural experience and identity. The intention is to share our stories and research with people from same/ similar backgrounds. The exhibition is an important domain for Hafus* to recognise their individual diversity and to define their own ethnic territory and identity too.

Natalie’s fascination with this subject mainly stems from her own experience and frustration of being very fair, almost blonde half Japanese who has never been instantly recognised as half Japanese. Natalie has found it very easy to spot other fellow half Japanese people and thinks that there is definitely a ‘half Japanese look’, which she further explores in her visual work. She uses photography as the medium to study and represent this ethnically mixed group.

It is important to mention that photography has been used as a research tool since the emergence of anthropology as a discipline in the mid-19th century. Therefore one can say they have an intertwined history. Anthropological photography looks at the anatomy, philology, archaeology, history of religion, biology, and geology of foreign tribes.

On the other hand, Marcia was raised in Japan where she constantly experienced being treated as non-Japanese despite her Japanese upbringing, which was also frustrating. With her somewhat fair phenotype, frizzy hair, tall and non-petite body she stood out from the ‘mainstream Japanese look’. Yet it was important not to stand out to and fit in which is part of Japanese culture. Having experienced being ‘othered’ in Japan, the question of why Japanese society finds it hard to consider her as an ‘ordinary Japanese’ person was an issue always on her agenda.

Marcia’s urge to analyse issues she personally came across as a Hafu in Japan led her to study sociology and investigate this topic further. Her most recent qualitative research project explores the relationship between the experience of Hafus in Japan and Japanese racial discourse. Japanese racial thinking is based on the assumed concept of [1] Japanese blood as giving exclusive ownership to cultural traits and the idea that [2] those cultural traits should belong to a particular racial group (Kosaku Yoshino 1992: 28). One must look Japanese in order to possess Japanese cultural traits and conversely those Japanese cultural traits should only belong to the Japanese ‘race’. This creates a problem for culturally Japanese individuals who do not necessarily ‘look Japanese’ (as portrayed and imagined by people) because there is an obvious discrepancy.

Quotes from Marcia’s accompanying interviews were placed next to each image, which created a strong narrative to introduce a debate around complex issues within our multicultural society. The topic was further discussed in the seminar which allowed the audience to explore various issues surrounding the topic of Half Japanese and others aspects of contemporary Japan. Experts in the field of art, cultural studies and sociology not only looked at Half Japanese identity and their sense of belonging but also dealt with other topics such as Japanese national identity and traditional/ contemporary Japanese art. Speakers included Elia Evanoff (LSE) Dr. Griseldis Kirsch (SOAS), Kiyoko Kiyoko Mitsuyama-Wdowiakand the two curators (Marcia and Natalie).

The intention was to create a cultural event, which advances the intercultural dialogue among Hafus and people with an interest in Japan/ mixed identity. This ongoing collaborative project is an extensive enquiry into appearance, race, culture, society, anthropology and science.

We gave a public lecture at Birkbeck College on the 26th of November 2008 (Wednesday) 6-8pm to give an overview about the project and to introduce some of the prominent themes relating to identity. This event is free. However booking is essential: www.bbk.ac.uk/llc/subjects/japanese/Special_Events/Lect-Series

For more information about the exhibition project please visit www.hafujapanese.org/

Hall, S. (1997) ‘The spectacle of the “Other”. In Representation: Cultural representations and signifying practices. in Hall, S. (ed.) London: Sage Publications, pp.225-79.

* A Hafu is somebody who is Half Japanese. It is a term coined in Japan. The word Hafu comes from the English word "half" indicating half foreign-ness. The label emerged in the 1970s in Japan and is now the most commonly used label and preferred term of self-definition.