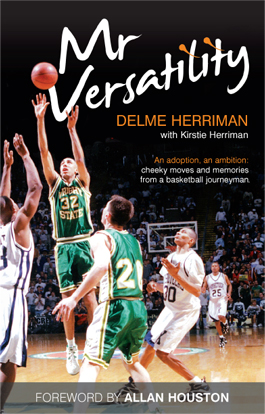 Delme Herriman is a mixed race man from the North West of England, who, despite an inauspicious start in life, achieved fame and prominence as a professional international basketball player.  He has written this autobiography with his sister, Kirstie Herriman,  as a thank you to his adoptive mother and stepfather and as encouragement to other young sportsmen and women.

In this charming and uplifting account of his life to date, Delme details his early life – including his adoption as a small baby by white adopters who had already adopted two other mixed race children.  The parents subsequently divorced when Delme was 5 years old and eventually his mother remarried.  Delme speaks poignantly about his family and the undoubted success of his adoption, despite them living in a largely “white” town – Widnes – where he grew up feeling loved and supported in his family, though not necessarily in the locality.

Delme writes enthusiastically about his career in basketball, with the peak moment being the receipt of a bronze medal at the 2006 Commonwealth Games.  His account shows the camaraderie of international sport as well as the competitiveness, with players developing close bonds and living in close proximity for months at a time – but also ultimately competing against each other for selection for the best teams.  His basketball stories show the exhilaration of professional sport but also the stresses and insecurity for the players and the power of the team coaches who could, and did, exercise their power erratically and at times unhelpfully for the team as a whole.  Mr. Versatility (of the title) refers to Delme’s ability and willingness to switch roles in the team.

The book, is honest and insightful about Delme’s ambition and his successes and failures, and mistakes.  All in all, Delme comes across as a delightful young man – a loving and grateful son and a popular and convivial team player.  He shows no arrogance about his success – recognizing that although he was naturally talented, this alone wasn’t enough and that he needed an enormous amount of family support to get him to training sessions and to help him achieve his dream of getting into a US college.

The book will undoubtedly appeal to PIH members with Delme’s clear understanding about racism and racial identity issues.  Delme’s adoption by loving white parents was undoubtedly a success, though not without throwing up some problems for him as a young man, though these were primarily concerned, not with being adopted as such, but with the family living in an almost exclusively white area.  Delme understands that transracial adoption went out of fashion in the 80’s and his account is a good example of why social workers took that approach, even though the result was so calamitous for many young people who grew up without permanent family support.

This book would also, I’m sure, appeal to sports fans and basketball enthusiasts.  However, primarily this is a delightful and heart warming read.  Sports biographies are not rare but Delme’s combination of honesty and personal disclosure make this both an illuminating story but also an uplifting one, filled with sporting anecdotes and charting Delme’s self development and growing maturity.  Possibly the book would have been stronger if there had been less usage of basketball terminology and techniques, though I speak as someone who, prior to reading this book, knew nothing about basketball at all.

Delme finishes the book by dedicating his story to his stepfather (now sadly deceased) and acknowledges his debt to him since his career could not have happened without his efforts and support.

Published by Delme Herriman, printed in the United Kingdom.