“William Cuffay – the life and times of a chartist leader” 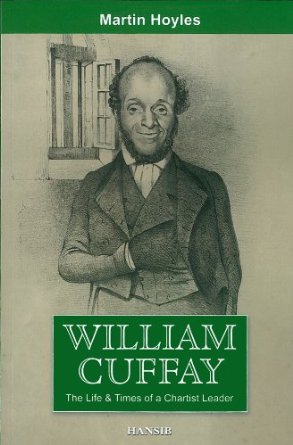 “William Cuffay – the life and times of a chartist leader” tells the story of one of the early chartists. William had a huge reputation in the mid-19th century, as did the Chartist movement, but both were then largely ignored for over 100 years. Why this happened is not altogether clear but the book combines the history of the Chartist movement with the biography of William Cuffay. This then is a part of Britain’s hidden history and it seems that it is only with the development of interest in black history that Cuffay has become more widely known.

William’s father gained his freedom and settled in Chatham in Kent, where he married a white woman and had five children, of whom William was the eldest. William’s life has parallels with his ancestors’ of moving between continents and exile from birth country in that his grandfather endured and survived the infamous middle passage to St. Kitts from Africa, his father came to England as a cook on a British warship and then William himself was transported to Australia because of his political activity with the chartists.

The book cleverly combines William’s story with a lot of interesting social history. In this Martin Hoyles manages to insert chapters on subjects such as the slave trade, life in Chatham in the 18th and 19th century and the development of trade unions and the chartist movement and transportation and life as a convict in Australia. The book suggests that the profession of tailoring, which William worked at, was quite a militant profession historically with a number of tailors being documented as having involvement in political movements. The author argues that possibly the work was insecure and left time to philosophise as well as opportunities for seeing how wealthy people lived. At any rate the profession was one of the first to organize itself into trade unions, from the early 19th century onwards, and William himself went on one of the first legal strikes in 1834.

Martin Hoyles shows the context for the development of the Chartist movement, with the changes in industrial production and movement of people into the cities leading to poor living and working conditions. What the chartists were demanding was votes for everyone aged 21 years and over, secret ballots, abolition of the property requirement for MPs as well as payment for them, more equal constituencies and annual elections. Apart from the latter, all of these eventually came to pass.

By 1842 William Cuffay was a leader of the London chartists and was elected to the National Executive. He chaired large public meetings and was known as a clever and witty orator. The new national petition of the chartist demands collected 3.3 million signatures and was 6 miles long! One third of the adult population of the country had signed it. By 1848 when there were revolutions in many European cities, the government became nervous about the risks of an insurrection and banned a planned peaceful demonstration. Cuffay and others were arrested and Cuffay was ordered to be transported for life to Australia where he spent the rest of his days.

The book is full of little known historical details and includes a number of illustrations. The chartists paved the way for the development of cooperatives, trade unions, free education, the Labour movement and progressive politics in general. It is extraordinary that their movement has been so neglected in the telling of British history. What is more, one of their leaders was a mixed race black man with an unprepossessing appearance but enormous courage and resilience in the face of adversity, as well as being a skilled and entertaining public speaker. It is certainly time he was given due regard.

The book is well written and well illustrated. It is easy to read but well researched. It is suitable for all ages and will be of particular interest to People in Harmony readers with its admirable central figure and masses of little known historical detail. I thoroughly recommend it.