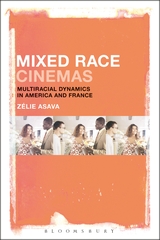 “Mixed race cinemas: Multiracial Dynamics in America and France” is an academic book aimed primarily at students of media studies and black and ethnic studies. In the book Zelie Asava has analysed over 40 films from silent cinema to modern day films in the United States and France, and has shown the way the two countries histories have led to different racial systems which have been reflected in the films that each country has produced, and in particular in their respective depictions of mixed race characters.

Zelie Asava explains that she chose France and America because they are both leading international film cultures with strong cinema industries, and focussed on mixed race people because they are the most widely represented category of mixedness on screen, possibly because their multicultural features.might be thought to have universal appeal. In this book. Zelie Asava explores the role, position and identity of mixed film characters, primarily women, because they are more visible in literature, cinema, TV and advertising than mixed men.

The book was written before the engagement was announced of Prince Harry to Meghan Markle and the book begins with a quotation from Meghan Markle in Elle magazine, where she had talked about her life growing up in the United States. Meghan had argued that Hollywood’s ideal of beauty had always been of a blond haired, blue-eyed variety. She said that until relatively recently she had had difficulty in finding roles in cinema, and that she could “audition for virtually any role … (but) I wasn’t black enough for the black roles or white enough for the white ones, leaving me somewhere in the middle as the ethnic chameleon who couldn’t book a job”. However, Meghan Markle noted that this situation had changed and that as mixed race and black women are increasingly represented on the screen, “viewers who may never have had a black or biracial person in their house as a guest” now see them on TV and in their home.

The book refers to the different approach to assimilation in the two countries. Whereas France saw racial mixing in the colonies as a form of positive assimilation, in the United States with its history of slavery and racial subjugation and focus on ownership and inheritance, there were laws against miscegenation in some states until civil right legislation in 1964. Films have reflected these issues in both countries. For example Dorothy Dandridge was very successful in “Carmen Jones” in the 1950’s but was legally designated as black under the “one drop rule” so had to use back entrances and servants elevators in white hotels at the start of her career. In France the republican ethos saw slavery as illegal on French soil but there was still racism, though it wasn’t as legally oppressive as in the United States. Zelie Asava says that Josephine Baker in France in the 1930’s was given far more opportunities than Lena Horne in the United States around the same time. . Josephine Baker had initially been a dancer in the Folies Bergere, often playing a seductive African savage. During the second world war her cinema career stalled,as there was a concerted effort under the Vichy Regime to rid the French film industry of jews and foreigners, and Josephine was both, having married a jew in 1937. However, she remained, and remains a French icon.

Zelie Asava explains that the grand boulevards in Paris were created by demolishing low income housing and over time working class people were pushed out of the city into the banlieues. Following Algerian independence many of the Algerians who came to France to work using their French citizenship rights, were housed in the banlieues but were doubly disadvantaged, since they were non-white and working class. Beur cinema grew up in the 1980’s to explore issues of identity in the French Maghrebi community, and were influenced by the United States hood movies, with the social and geographical similarities between the US “projects” and the banlieues. Whilst this did enable this community to develop identity issue films, it did limit French Maghrebi film makers’ ability to make mainstream films.

Zelie Asava refers to the fact that scholars have identified five black stereotypes, “Tom”, (self promoting at expense of own community), “Coon”, (harmless clown), “Manny” (long suffering maid), “Buck” (menacing and hypersexual) and “Tragic Mulatto” (mixed race, and if female passing for white and seducing white men and if male, ambitious and devious). Zelie Asava describes a number of films where “passing as white” is an issue, from “Lost Boundaries” in 1949, which was a true story about a mixed race doctor and his wife, who pass as white so that the doctor can get work in a white hospital as he cannot get work in a black one. Their children grow up thinking they are white. This was criminal behaviour in the US at the time. When they are eventually exposed, the assumption was that their place was in the black community. Although many of the films discussed explore the dilemmas faced by mixed characters sympathetically, nonetheless the assumption is that they have to be black or white, rather than both.

The book, with its many film descriptions, shows that racial mixing has been a feature of American cinema from the era of silent films to the present day. In contrast, French cinema, without a large non-white population until recently, has been largely focussed on whiteness. The French films described in the book don’t stigmatise interracial love in the way some American films have, and their focus is frequently on issues of identity, with some recent ones exploring the experience of people returning home and finding themselves foreign in their country of origin.

2016 marked a significant year in mixed race cinema as two films celebrating interracial couples received rave reviews. These were “Loving”, and ”A United Kingdom”. “Loving” was a true story about a mixed couple who, in the 1960’s, got married illegally in Virginia and had to choose between going to jail or going into exile. This ended in the Supreme Court in 1967 and resulted in the remaining miscegenation laws being rescinded. “A United Kingdom” was also a true story, about Seretse Khama, the King of Bechuanaland (Botswana) who in 1948 married Ruth Williams, an office worker from London. Their marriage was met with fierce opposition from their families and the British and South African governments who tried to force Khama’s abdication by exiling them in separate countries. Despite this, Khama went on to become the first president of an independent Botswana. As Zelie Asava points out, these people changed the course of history, even if they were reluctant heroes.

As Zelie Asava says in her conclusion, mixed race representations are popular in advertising, films and television, but can still be portrayed as isolated, unstable and the “tragic mulatto” is still prevalent. Nonetheless, the American and French film industries have come a long way in negotiating racial representations. Films can powerfully challenge stereotypes and characters frequently represent more than one identity, with mixed figures representing the ultimate challenge to ideas of race since colour blindness overlooks the problems of disproportionate unemployment, imprisonment and disenfranchisement affecting the mixed/black population.

This is a book for students of media studies, or of black and ethnic studies. The author describes over 40 films in detail from both French and American cinema. It shows the connection between the history of the two countries and the way their different racial systems have evolved and advocates for a need to move beyond binary conceptualisations of race, gender and sexuality and fixed ideas about identity. It is a well written academic book rather than an interesting read, but for those of us interested in race and mixed race identities and cinema it is fascinating in its scope and coverage.