Shades of the Future 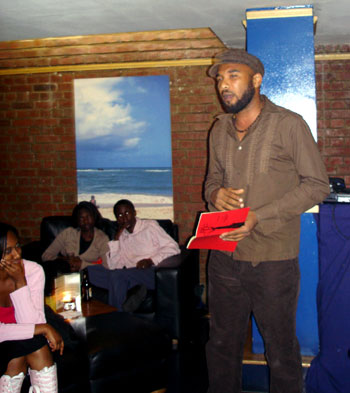 This year's day conference was an excellent event with three very different and high quality guests – two speakers and a performance poet. It was, as usual, an opportunity to greet old friends and to make the acquaintance of new members and interested people. Altogether the day was a huge success with plenty of discussion and action.

This point was further extended in Toyin's talk about mixed race children and the public care system. He opened up the possibility that mixed race children are more likely to enter the care system and less likely to have their particular needs understood once in care. This problem has been around for a long time but it is reassuring that, finally, there are social workers and (perhaps more importantly) social work educators ready to investigate the questions of both quantity and quality in the area.

Simon Barth gave an account of the Multiple Heritage Project which targets mixed race children and their families in the city of Sheffield. Painting a dire portrait of high rates of school exclusions, criminality and other markers of social exclusion amongst the mixed race community in the city, Simon spoke about the Project's work in attempting to address the negativity around mixed race. He argued that the work of the project could be taken up nationally as a model for projects in other cities with similar experiences amongst the mixed race groups.

Although these two speakers each gave a rather gloomy picture, there is a very positive side to each of their stories. On the one hand these matters are now being discussed more openly (yes, the facts are very shocking in the cold light of day) and on the other this airing enables the issues to be addressed rather than denied or hidden.

Our performance poet, Anthony Joseph, lifted our spirits by reading some beautiful poems including one about his small daughter who was present for the day. He has published some of his work and this is well worth a read.

We were delighted to have Rob Worrall chair the afternoon. He talked about his journey to trace and meet his Nigerian father after no contact during the years he was growing up (April 2004 newsletter). Rob is researching for a book he’s writing that will help others wanting to trace an absent African birth parent and would like to hear from people interested in contributing to the book.

So thanks to the speakers and everyone who helped to make the day a great success. We are left with plenty to think about and, as an organisation, decisions about how best to address the challenges presented by the content of the talks. If you didn't make it this year, hope to see you next year. These are exciting times for the mixed race community and for People in Harmony.