during or soon after the Second World War?

I am an historian at Anglia Ruskin University in Cambridge, writing a book about the war children of

black GIs and Bristish women, and if you are one, or know of someone who is, please get in touch:

During the Second World War, of the approximately 3 million American soldiers stationed in Britain,

over 130,000 were African American (and addtionally some were Mexican and Puerto Rican).

Many of these soldiers had relationships with British women but, if they were non-white,

they were not permitted to marry, for the segregated US army forbade it. It is estimated that these

relationships resulted in the birth of about 1,700 to 2,000 mixed-race babies. Many of these children

were placed in children's homes, sometimes followed by fostering. There has been little study of

such children and I want to chart their early experiences. I have so far interviewed 18 people but

would like to interview a few more, if possible.

For comparison, I also want to interview those born in the same period with black West Indian fathers,

so if you are one of those, or know of someone who is, please also get in touch. Very many thanks. 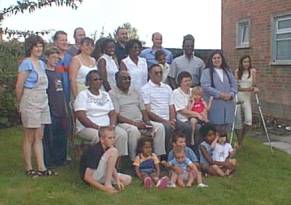