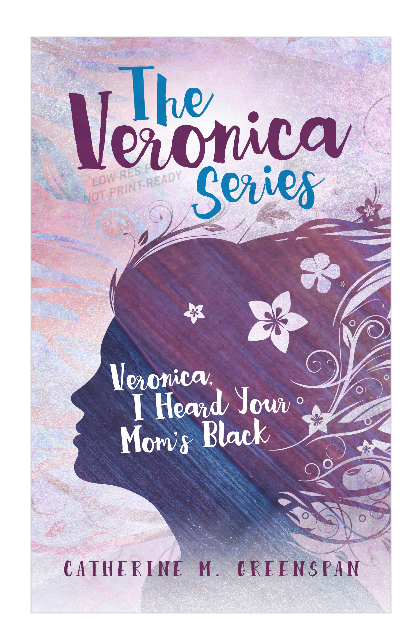 wants to do well in school, hang out with her  friends, and enjoy her family. But one day at school, a boy accuses, “Veronica, I heard your mom is black.” Meanwhile, the black girls are demanding allegiance to them, while some white girls are making mean comments about her frizzy hair

Suddenly, it seems, the world is obsessed with Veronica’s appearance, her family, and her racial loyalty. So where does she fit it? Will her friends reject her? Why does it matter that her mother is black and her father is white?

As she struggles to find her place in this weird world, Veronica is pioneering a new place in contemporary Young Adult literature. She is the first biracial protagonist to star in a series of novels.

“I wrote The Veronica Series to express all the bizarre, scary, and stupid things people say, do, and think when they can’t figure out how to categorize you,” says Catherine M. Greenspan, who penned the stories while earning a graduate degree in Writing at the University of San Francisco. “Most people assume that my sister Elizabeth and I are white because of how we look, and as we were growing up, we didn’t know of any other mixed-race kids. It was pretty alienating sometimes.”

Catherine and Elizabeth unleashed their passion for reading and writing while earning bachelor’s degrees as English majors from the University of Michigan, where they took classes together. Elizabeth earned a master’s from the Columbia University Graduate School of Journalism and wrote many books, while Catherine worked in finance for 10 years.

In 2016, they fused their writing and business skills to form Two Sisters Writing and Publishing, which is publishing The Infinite Veronica Series.

More mixed-race children live in the United States than ever before. In 2015, a whopping 14 percent of infants were multiracial or multiethnic, and that’s triple the number in 1980, according to Pew Research. Ten percent of those babies have one white parent and one black parent. Almost half have one white and one Hispanic parent, researchers found, while 14 percent have an Asian-white parental combination.

When Atkins’ parents wed during the Civil Rights Movement in 1966, interracial marriage was still illegal in 16 states. Then on June 12, 1967, the U.S. Supreme Court struck down those laws in Loving v. Virginia, as depicted in the film, Loving.

The release of The Infinite Veronica Series commemorates the 50- year anniversary of the Loving decision.
The sisters are making history by publishing their mother’s gripping memoir, The Triumph of Rosemary: A Memoir by Judge Marylin E. Atkins. The mother and daughters are the first such trio to write and publish their own books.