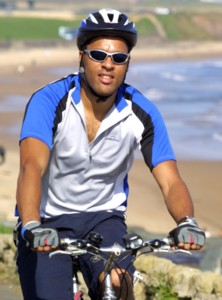 ‘It could almost be surreal, if it wasn’t true. Here I am sitting on a beach in the North East of England, a divorcing 35 year old father of two, with my children playing in the sea, contemplating a trip to Africa’s most populous State to meet my birth father for the first time. In one way, it matters not how I came to be going, but that I am going in the first place, or should that be: that I am going at last?’’

So begins my journal, which I started just over two weeks before going to meet my birth father in Nigeria for the first time, and which I ended twelve days later when I returned to England. The journal is a significant part of my personal journey, and the trip to Nigeria was perhaps only the end of the beginning of a lifelong voyage of self-discovery. A voyage of living with knowing and living without, of wondering, and wandering, of searching for my birth father in my dreams and my musings, and finally meeting him in the flesh. Of reaching outwards and reaching inwards to find an outer calm, an inner strength, and a deeper understanding of who I am.

There are many journeys that we embark upon in this life, travelling from one place to another, and often back again. Sometimes through physical movement, and sometimes through the heart and soul, and often with the confines of our own mind’s eye. I was fortunate that my particular journey to Africa was both the end of the beginning, or a closure and an opening up to a new adventure and perhaps eventually a new life! I was doubly fortunate because of the support and love I had to undertake this venture, both from my family here and my ‘adoptive’ Nigerian family that hosted me in Lagos.

I came back the same person and at the same time a different one, perhaps more complete and enriched. My life had completely changed and at the same time, it carries on as before, continuity with change. In her book, Sugar and Slate1 , Charlotte Williams describes her mother’s attraction for the warmth and comfort of the sea on a long voyage from Liverpool docks to the Sudan: ‘Ma is happy on the sea…the place between somewhere and nowhere was right for her’. (Sugar and Slate, p. 7). On a ship, out on the deep blue, there is a comfort in belonging to neither where you left, nor quite yet where you are going to. In one sense, on the open sea, there is no yearning for that sense of belonging that those of mixed race often feel, because you know this time you are on the way to somewhere. But in day to day life, we have that feeling of never arriving and always being in the road, in limbo, not always knowing where to. ‘I comin’, I goin’ I comin’ back, I goin’ away…..’ (Sugar and Slate, p. 108). This may not have been exactly what Ms Williams meant but it is my interpretation of what was written perhaps slightly coloured to reflect my own experience.

I identified deeply with such sentiments, but above all also wondered what I would feel like on the way to Africa to meet my birth father? But when it came to it, I could only say that I felt like someone who was going to do what I was going to do. In my journal, I had tried to express these feelings in terms of a kind of proportionality of the main heart-felt emotions that I was feeling at any one moment in time, for example ‘Today I am feeling 50% anxious, 25% scared and 25% curious’. But whilst these emotions stayed with me, and I felt varying degrees of each, before, during and after my trip to Africa, they alone, could not quite sum up how I felt.

A few weeks before I left, I came across an article in the Sunday Observer magazine by the journalist William Shaw, about a young woman who was searching for her Nigerian birth father. It was a strange coincidence that that particular Sunday I chose to buy a newspaper, which I only ever buy intermittently. The article struck a real chord with me, and I managed to contact the young woman (Collette) via William Shaw. It turned out that Collette only lived across the river (Tyne) from where I lived on the North East coast of England. We struck up contact by e-mail and text messages, and a few months later between Christmas and New Year, I took the ferry across the Tyne with my two children to meet Collette with her two children. Collette is searching for her birth father (just like I was), who was a student (just like mine), and through this time, Collette is perhaps feeling like someone who is going through what I and others have been through. Out of a such experiences and meetings our lives become enriched, and new avenues of mutual understanding are opened up and develop and help us evolve.

I very recently dug out some early notes, which I had written between the ages of 18 and 20 about the way I felt, and at the time, I was angry with my birth father. At the same time, I was never quite sure about how I should feel, and whether I had the right to feel the way I felt, or whether I should feel a certain way or not. I realise now that this period would not have been the right time to meet my birth father. I was still too angry.

When you are mixed race, the same social and cultural markers borne out of collective experience(s), which are laid down for white people, or even those of ethnic minority groups do not always apply. The ‘other’ category hides a myriad of distinctive possibilities. As Yasmin Alihbia-Brown found2, in terms of social awareness, and a wider understanding of the myriad of mixed collective and individual experiences of people of mixed race, and the challenges and issues that arise from these, we have only begun to scratch the surface:

‘By definition, there are people who, by their actions or existence, defy community, ethnic and racial boundaries. For me the most depressing part of this rich, varied and fascinating journey through the lives of mixed-race people was the way institutions and professionals still fail to understand this.’(Mixed Feelings, p.162)

There is little information to read about how you will be feeling as you grow up and develop as a mixed-race child. This is true in general for mixed race people, and even more so for those who have not met one or both birth parents. Feelings of not belonging to either side or culture and feelings of being very ‘mixed –up’, are common and natural, but are hardly ever voiced or expressed as such. As we grow up, these feelings are buried just below the surface, because we believe they are not deemed acceptable, as we strive to conform, and to belong somehow, somewhere. This is just one example of where it would have helped me to know that it was perfectly natural to feel that you don’t belong completely just to one culture or social or racial background, and that sometimes not belonging is unique and can be used as a positive strength.

Promoting the awareness of support networks such as People in Harmony, which can provide frameworks of reference that were visibly lacking as I grew up, are crucial if we are to help the younger generations of mixed race Britons. This has inspired me to want to learn more and write about the personal experiences of people of mixed-race origin (and in particular those of Eur-African origin) who have traced or are trying to trace one or both birth parents.

I would like to understand more about what motivates individuals to want to trace their birth parent(s), and what they are/were hoping to achieve. I would like to learn about how such experiences have impacted on people’s lives, and about what happened before and after such events.

Of course, there are a number of linked issues that are also worth exploring, such as what issues each individual had to deal with, including the truth surrounding his/her birth parents, and whether there was simply a closure or also an opening towards the start of a new relationship after the first meeting. My own experience has also shown that there may also be religious, cultural and social differences encountered because of a different upbringing that had been experienced by the individual compared with his/her birth parent(s), and perhaps even new siblings. For example, in seeking to develop a good relationship with new siblings, how far may one be replicating the need, often felt by those of mixed race, to seek approval and strive to belong and fit in with others?

Exploring such issues through the personal journeys of the many people, who I believe would like their stories to be told, and who would like to learn from the experience of others, could help inform the development of practical guides to help better prepare mixed race people for the road ahead. I hope that this article may inspire people to want to tell their story. If there are people out there, I would be grateful if, in the first instance, they could contact me via e-mail, through Val Hoskins at People in Harmony.

My journal ended as follows:

It is not because of coincidence that things turned out the way they did. I feel like someone feels like when they have met their birth father after a long time of walking the earth and I can only relate to this feeling by saying that many people have passed this way before me. Whatever happens now I have done what I set out to do. Somehow Europe seems tidy and boring. I now know that this was the right time to do what I had to do.

Click here to read Robert's poem 'All of Me'