On 5th July People in Harmony held its AGM/Annual Conference on the theme of roots and culture. The event kicked off with a bang as we all joined in a 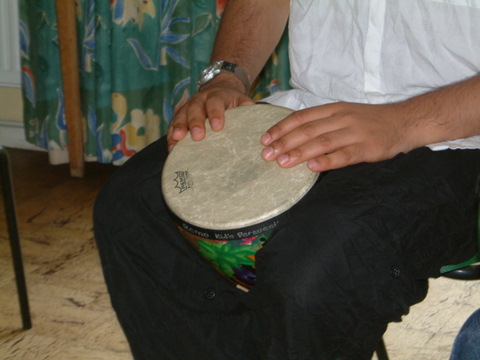 drumming workshop led by member Darren Chetty. Even though none of us had played the African drums before, he soon taught us a range of beats and rhythms so that by the end of the session 2 groups were playing alternating beats to the chorus of 'I want more ice-cream'! Despite our varied age range we all lost our inhibitions and had a lot of fun.

At the business part of AGM several new committee members including Darren Chetty, Melanie Gabbi were elected along with Wendy Taylor, Kris Iyer, Amos Hurst, Val Hoskins, Jill Olumide and David Hoskins. We talked about the need to develop and expand the work of charity. It was felt to be essential to seek members' views on what they wanted from the organisation and how they could contribute, perhaps by helping with the newsletter, organising events and local support groups. It was recognised that the current committee had been over stretched and needed help especially with fund-raising in order to employ a worker. We then all enjoyed a shared lunch in the garden.

The afternoon session started with authors Asher & Martin Hoyles discussing the oral tradition as a vehicle for passing down cultural heritage and how performance poetry was part of that tradition. Their book 'Moving Voices Black Performance Poetry' featured a selection of performance poets with a brief synopsis of their lives

They also described how live poetry could engage excluded young people in schools and prisons and increase self worth. By showing rap as an accepted medium of expression it gave confidence to those who may have found it difficult to do so via the written word. Finally Asher, herself a performance poet, movingly performed several poems for us.

Patrick Vernon a respected genealogist explained how he got involved in tracing his own family tree. He described recent developments of putting old records from the Caribbean on the internet which made the search easier for people from other countries. Tracing Roots could be used as a vehicle to give young people, who often have no knowledge of their family history, a sense of purpose, belonging and positive identity. His website Every Generation gives further info as to how to go about it.

Finally author Ian Manners talked about his varied career including being a rugby player, running a pub and restaurant and how he came to write his novel 'Where Do I Belong?' He based it on his experiences of living in Germany and Kenya and describes a mixed race relationship between a white man and a Kenyan woman, and how the woman became a victim of a racist attack in Germany. Ian learnt much about the history of Kenya from a Kenyan perspective and used this when writing his book. As a first time author it was difficult to interest publishers in his manuscript but he made many contacts who also had links with Kenya and who helped him when he decided to publish the book himself.

It was a very stimulating day for everyone