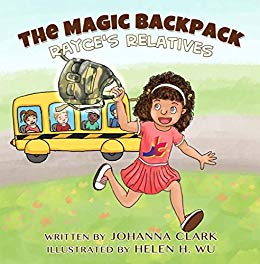 Recent research by the Centre for Literacy in Primary Education has found that only 4% of UK publishers featured black or mixed ethnicity characters in children’s books in 2017 and only 1% had the main character as black or mixed ethnicity. This book, admittedly published in the United States, has a main character called Rayce who is of mixed race, with a black father and a white mother.

The story is about a little girl who has recently moved from living in England to living in the USA and deals well with the conflicting emotions children have when they are suddenly uprooted. Rayce finds it difficult to adjust to school in New York where she is teased. She has never though of herself as different and two of her classmates tell her when her parents come to collect her that they wouldn’t like their parents to be different colours as they would be embarrassed. They call her mother “vanilla” and her father “chocolate” and call Rayce the “chocolate-vanilla swirl girl”. Rayce wishes she looked like everyone else and she feels ashamed of her parents. Eventually Rayce gets in a fight with a boy and is scared to go home. Rayce’s mother tells her that it is basic human nature for people to tease and even hurt each other over anything they may see as different. Along the way Rayce has been given a magic backpack with a light and a letter inside which stresses that it is allright to be different and that she needs to love others and in time they will see her light and will be drawn to her love.

This then is a little morality tale, with a religious component, which appears to say that if you accept yourself, others will accept you too, but that there will be time when being different will be challenging. I do have a little anxiety about the message because it feels as though the adults see it as Rayce’s problem about difference rather than children behaving in a racist way. I would have preferred a dual approach with the school taking some responsibility for educating the children about differences and racial prejudice rather than Rayce and her family having to deal with it alone.

The book has an accompanying work book with questions such as “Do you like your school? Why or why not?” “What do you see when you look in the mirror?” “What should you do if you have an issue at school?” “Is there someone at your school who helps resolve conflict?” There is a page about being different giving tips on how to cope with being different and conflict.

I am uneasy about linking difference and conflict since I don’t accept that being different necessarily results in conflict. Whilst the author acknowledges that we should celebrate each others differences she then goes on to say “There will be times when your difference may cause conflict with others” and gives tips on how to cope. However, if someone’s racial difference results in teasing and name calling it seems to me that this is more about racism than about conflict. Of course children notice differences but don’t automatically attach negative connotations to them. That is learned behaviour and whilst you don’t want children to fight over it, it shouldn’t be the responsibility of the child who is visibly different to have to deal with it alone.

Some of the language is rather philosophical and not necessarily suitable for young children, which in other ways the book seems directed at. For example, there are quotes from Levar Burton in the book and in the workbook from Ghandi which would be difficult language and concepts for young children. Some of the other language is rather unusual, and I am uncertain both which age group the book is aimed at and whether it is intended for British children or American children. For example “mocha colored skin”, “fish and chips” and a “spot of tea” and talk of fish and chips wrapped in newspaper. I think racism is different in the USA than in Britain which has a large and growing mixed ethnic population, particularly in the cities, so that it is less likely that a mixed race child would attract the name calling that Rayce has had to deal with. I don’t know whether Rayce is an American name but think it is an interesting choice.

This is a brave attempt to deal with children’s emotions over being uprooted from their familiar world and being teased in their new school environment. It is beautifully illustrated by Helen H Wu, and a nicely told story. I would hesitate to recommend it to Harmony members because I don’t feel the religious message and approach to racial differences are appropriate for children though it might be interesting for some parents to read it and see if they agree with me!