The insistence on a policy by social workers of same race placements has meant that black and mixed race children wait longer for families and race is treated as the overriding aspect and the major matching consideration. ‘Social Services put too high a premium on colour and are restrictive in their insistence on finding the right ethnic match’ according to Oona King. “Transracial Adoption – What’s The Problem?” a booklet by Dr. Marie Macey, Senior Lecturer in Sociology at University of Bradford, contains a review of the research findings, in both Britain and the USA, which provides no support whatsoever for the virtual ban on transracial adoption that has been in operation for the last quarter of a century in UK. Macey points out that the research literature has had surprisingly little impact on policies surrounding the racialisation of fostering and adoption placements of ethnic minorities.

The subject of transracial adoption continues to be hotly debated as a recent update of the booklet by Cindy Matthews, a People in Harmony member, makes clear. Opposition is not based on poor outcomes (in terms of family breakdown or poor self-esteem) but on concerns that young black or mixed race people brought up in white families might not have appropriate racial identities. The authors’ position is that above all else children need to grow up in loving families, if they are to have good self-esteem and the foundations to make a success of their lives. They argue that the Children’s Act said Local Authorities should give “due consideration to the child’s religious persuasion, racial origin and cultural and linguistic background” in any decisions made about them, and not that transracial placements should never take place. 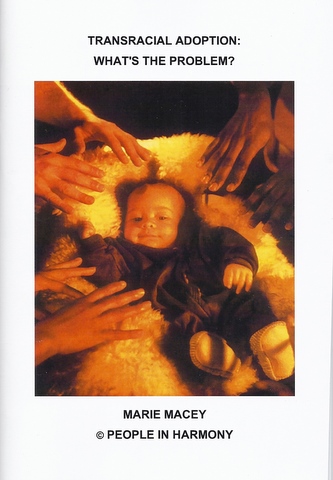 Despite the research findings and the fact that legislation specifically prohibits race or ethnicity being the only, or even main, consideration in the placement of children for adoption this frequently appears to be given priority over the prospective parents’ ability to provide a loving and nurturing home. Ethnic minorities are over-represented in the numbers of children in public care, with mixed race children being two and a half times more likely to be in care than any other group. ‘Since they are also the fourth largest demographic group, this situation is likely to get worse’ commented Cindy Matthews. The booklet, published by People in Harmony, is priced at £5.00 inc p&p and details are on their website www.pih.org.uk

People in Harmony is the national charity for mixed race people, families, and couples that offers information support and advice on mixed race issues. It developed from an organisation founded in 1972 to dispel the racist views of Enoch Powell.

Cindy Matthews is an ex-social worker and a People in Harmony member.

Bebbington & Miles 1989 research found mixed ethnicity children were two and a half times more likely to be in public care than any other group.