A full in-depth report on this conference that was chaired by Baroness Howells of St Davids features talks by speakers such as Oona King MP and Yasmin Alibhai Brown and a summary of  the workshops, is available for purchase from us. For more details, click here. 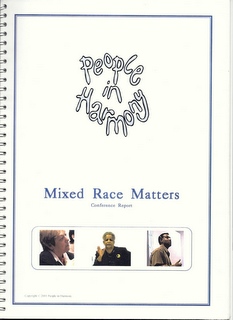 This conference was PIH's first big event for some time, and the Committee decided to organise it in London after its successful application to use the Diana, Princess of Wales Memorial Fund premises at Westminster free of charge. This meant we could were able to make the charges reasonable (for a full day conference) so that members, mixed race people and those just interested in the subject could afford to attend as well as statutory agencies. We were also helped by the fact that the premises were near Westminster so that Baroness Howells of St Davids, one of our earliest members, was willing to chair it and Oona King MP agreed to speak after lunch before sprinting over the bridge to parliament! Because PIH has built up a substantial network of 'expert' contacts who were willing to give their time to speak, we were able to assemble a good range of speakers.

The aim of the conference was twofold: to air topical issues such as 'mixed race and the census' and mixed race and the media', and to give an opportunity for mixed race people, couples or parents of mixed race individuals to share their experiences. The day was therefore a mix of speakers, workshops and panel discussions.

Some 70 people attended, the maximum the venue could hold, with many coming from out of London despite transport problems. There were lively debates in all the sessions, and the feedback forms were extremely positive, with 99% saying the conference met all of their needs and most people indicating difficulty in choosing which session they got most out of.

The most popular speaker was Oona King MP who talked both of her personal experiences as part of a multiracial family growing up in Hackney and how her parents' relationship was affected by racism, and the importance of people such as herself being a role model for the new generation of mixed race children. Ros Howells ably chaired the conference interspersed with snippets of wisdom from her experience.

One of the most frequent comments was that the time for the workshop was too short and people wanted to attend more than one workshop.

The most popular workshop from the evaluation forms was the 'personal journeys' session which gave mixed race individuals the change to explore together their experiences. One woman said with feeling, at the plenary session, that she had been waiting 30 years for such an opportunity. In the light of this expressed need, we plan to give people an opportunity to explore their experiences at our next get together in early February.

The conference was both video and audio recorded and we plan to publish a summary in the new year. Many thanks to all our speakers, workshop facilitators, Carl Callam and his team who filmed the conference for us, the volunteers who helped us out on the day and Baroness Howells of St Davids for chairing the day.